Just ahead of the birth date of Chuck Berry I thought it time to blog about him. While there are many artists that shaped the Rock and Roll landscape, other than Elvis one of the biggest, and most enduring was Chuck Berry. While he would later cover many songs, in many ways Berry was a true original. Not to say he did not rest on the shoulders of many of the greats before him and copy a tune or three, but few people capitalized on this new music like Chuck Berry. At least 60 of his songs have been covered and many by the best pop music has ever seen such as the Beatles, the Rolling Stones, the Animals, Buddy Holly, Eric Clapton, Elvis and list goes on and on. While being ‘out of fashion’ soon after his initial success and not producing any popular new music, he still managed to influence a generation or two at least. I’ve referenced him a few times because of his musical reach and impact.
Having said all this, he wins no citizen of the year awards as he really wasn’t the nicest man. Were we to judge all our music and art based on the personalities and social fitness of its creators the cupboards might be more than half empty. I am blogging about the music and not as much about personalities or political correctness, revisionist history or even legitimate complaints, therefore I shall carry on. Be that as it may, there is at least one person I will not ever mention whose music I once enjoyed, so I do have a line that can be crossed.
“Maybellene” written by Chuck Berry and adapted from the Western Swing song “Ida Red” (recorded by Bob Wills and his Texas Playboys) in 1938 which is also an adaptation of the same song from the ‘Fiddlin’ Powers & Family’ in 1925. Sorry about the rabbit hole here but it’s also based on the 1878 popular song written by Frederick W. Root, “Sunday Night”. So it’s a long story about song credits on this one (I’ll save you from that) however I did read that Berry was going to call the song “Ida Red”, but Leonard Chess (founder and part owner of Chess Records in Chicago) spontaneously renamed it after looking at a box of Maybelline cosmetics in the studio left behind by one would think a female singer. Hence the odd spelling to avoid a lawsuit.

Covered about 90 times it was Berry’s first hit song. Released in July 1955, still freshly pressed it was rushed off to Alan Freed who was then in New York City, where he played the heck out of the song. Berry’s song hit #1 on the R&B chart and peaked at #5 in 1955 on the Pop charts.

Gene Vincent was a popular rock and roll singer and a pioneer in rockabilly in the 1950’s and 60’s. This is his version from 1959.
“Roll Over Beethoven” written by Chuck Berry, released May 1956. Apparently inspired by his habit of poking fun as his sister Lucy for her love of (and monopolizing the family phonograph player with) classical music. It’s literally a message to the old Classical composers to ‘Roll Over’ in their graves as there is a new sound and it is called Rock and Roll.
Covered close to 100 times by artists such as The Beatles, Johnny Rivers, Jerry Lee Lewis and as ’Roll Over Vic Vella’ by Iron Maiden in 1992 (it’s more than odd that one!)
Here is a not so odd but rather a great cover by Electric Light Orchestra (E.L.O.) in 1973. Saw them play this live in 1978, awesome! 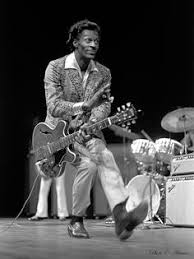 “School Day“(Ring! Ring! Goes the Bell) written by Chuck Berry, released March 1957, hit number one that year on the R&B charts, 24 on the UK singles chart and one of his highest rated Billboard singles at #5.
Covered at least 70 times, here is Lloyd Arnold
“Rock and Roll Music” written by Chuck Berry, released September 1957 and a classic R&R song if there ever was one.
Covered most famously by the Beatles in 1964, then the Beach Boys in 1976 and over 50 times to date, here is a band from the same place Chuck recorded his first and best music, Chicago.
REO Speedwagon in1979. The Beatles in 1964 and The Beach Boys in 1976.
“Sweet Little Sixteen” lyrics written by Chuck Berry, released January 1958. Another number one hit on the R&B charts, and his highest chart position throughout the 50’ and 60’s at #2 on Billboard.
As previously blogged the melody of this song was ‘copied’ by the Beach Boys song “”Surfin’ U.S.A.” and a song credit to Chuck Berry with the publishing rights and royalties going to the owners of Arc Records. I have recently discovered courtesy of Secondhandsongs.com that Berry’s song was actually a copy of the melody from “Route 90” by Clarence “Bonton” Garlow and His Orchestra from 1953. Wow, when you listen  it’s so obvious! Sorry Chuck no points for originality there, though the lyrics he wrote are pretty great.
“Sweet Little Sixteen”  Jerry Lee Lewis in 1962.
“Johnny B. Goode” written by Chuck Berry and first released as a single in March 1958. One of the most recognizable R&R songs in history and ranked #7 on Rolling Stones  “The 500 Greatest Songs of All Time”. However once again we find Chuck using music from someone else, the guitar intro is pretty much an exact copy of Louis Jordan’s song “Ain’t That Just Like a Woman” from 1946 played by guitarist Carl Hogan.
Listen to Louis Jordan “Ain’t That Just Like A Woman” written by Claude DeMetrius and Fleecie Moore. In the first few seconds you will hear the guitar intro. This song was a big R&B hit in 1946. In fact Chuck would cover this song himself in 1965.
“Johnny B. Goode” Here is Chuck Berry adding his own flair to the guitar.
This song has been credited with inspiring guitar players around the globe. Covered at least 200 times by artists such as Johnny Rivers, The Beach Boys, Bill Haley & The Comets, Elvis, and Cliff Richard.
Here is the late Roy Buchanan playing his Fender Telecaster (you guitarists may correct me on that) in a version of “Johnny B Goode” from 1973. One of the best guitarists that has ever lived, and he was a tutor to Robbie Robertson from the Band. It’s a long video with an interview but just listen to the first minute and a half or so, if you haven’t heard him before I think you’ll agree he was amazing.
“Memphis, Tennessee” (1959) written and performed by Chuck Berry, no bits from anyone here I think this one is all Chuck.
One of the best covers of any song, here is Johnny Rivers, it went to #2 on Billboard in 1964.
Chuck would only have one #1 hit song on the Billboard charts. It came in the form of a novelty song called “My Ding-a-Ling” in 1972. An interesting history with this song as well; its an adaptation of his 1968 song “My Tambourine” Written by Chuck Berry. But it is really a copy of this song “My Ding-A-Ling” originally written by Dave Bartholomew and Sam Rhodes from 1952.
For what is worth it’s Chuck Berry’s worst best song.

So that is Chuck Berry, part of the first group of inductees into the Rock and Roll Hall of Fame and for all his ‘borrowing’ of others music managed to carve himself a place as a key figure in R&R history. As I quoted Chuck in R&R Part 4 saying “there’s nothing new under the sun”, he managed to take bits and pieces from many artists and the aggregate was one remarkable performer.
Music Trivia. Where did Chuck Berry get his “duck walk” from? Apparently, he was trying to hide the wrinkles in his pants while performing in the Alan Freed show at the Paramount Theatre in Brooklyn, New York, in 1955.
Check this out for more duck walking guitar, that’s no Marty McFly!
References: https://secondhandsongs.com/, https://en.wikipedia.org/wiki/Main_Page, https://en.wikipedia.org/wiki/Chuck_Berry_discography#Singles, https://calendar.songfacts.com/september/8/4062