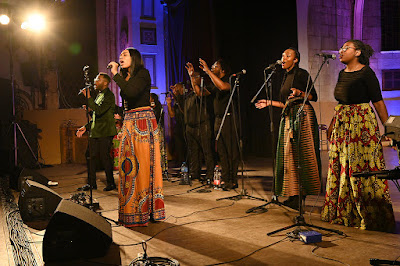 Today I am talking about the voices in the back, these singers may also include the ones traveling with the recording artist, but some session musicians worked in the studio only, as always there are exceptions. Once upon a time, most every solo singer and many groups/bands used backing vocalists to fill out the sound they were trying to deliver to their audience. Today these singers may be used less frequently, there purpose is to fill in a missing element groups can’t produce on their own, such vocal range, pitch and sound. Truth be told many well known singers if asked for an “F” are more likely to show a middle finger rather than sing a perfect fifth.
This in part explains why backing vocalists are used, but why do these singers choose to stand in the shadows? My research has revealed there are many reasons. One is they are happy to take on this role and they enjoy what they do. Not everyone wants to have the responsibility of the lead, it’s a lot of pressure for one thing, another is you are both the studio and the travelling voice. If you are a session contributor you sing for The Rolling Stones one week and the next maybe Bruce Springsteen. If you travel with the artist, that’s your one gig and your life and or family is left behind. Some aspire to be a lead or solo artist and have tried to go it alone and failed. Some do both and others are just more comfortable in an ensemble setting.
We all known people in many walks of life that are nervous about speaking in public, even though they might be very knowledgeable on a certain topic. My brother plays bass in a few bands, I’ve hear his singing voice, it’s pretty good, yet he doesn’t want to sing when they perform. I have a very close friend who plays guitar, I think he’s pretty good, don’t know for sure cause apparently he’s too shy to play for me. So, if you think in those terms, singers are people too, not everyone wants to be the boss, not everyone wants to be front and center all the time.
Many of the “backup” singers were actually part of the group, for example, Gladys Knight and The Pips, Sharon Jones and The Dap Kings or Elvis Presley and The Jordanaires. There are many harmonizing groups where the lead singing was shared but they may also employ background singers to fill out the sound, both in studio and on the road. Diana Ross was once part of the Supremes however just like Martha Reeves of the The Vandellas, she became the title singer. For many the backup gig was just a means to an end and their solo career was inevitable, think of Whitney Houston, Cher, Tina Turner and Mariah Carey.
There are a lot of places where a singer can fit into recording. As we see in an orchestra for example, not every violinist it’s going to be first chair, not everyone is a Concertmaster and there is only one Conductor. So similarly we see this with singing, and let’s face it if you were Queen it’s not a really any question that Freddie Mercury would be your lead singer. This pattern repeats itself many times, one voice clearly stands out from the others, relegating them to the role of a backup singer.

On the Topic of a Lead Singer

I would have to say from my reading it seems that it is rare for a backup singer in a group to go out on their own and have sustained success as a solo artist. There have been many attempts to do so and and it’s not unusual for those attempts to fail or at least not reach the level that the artist would desire to make a decent living. While the lead from a group will typically have more success such as Justin Timberlake (NSYNC-who shared with Chasez) or the sole lead of Beyoncé (Destiny’s Child). Their success is legendary but other members in a backing role did not achieve much of a solo career.
Aside from the vocal groups, a number of lead singers from established bands have had various levels of success. The recently retired David Lee Roth comes to mind, although he did produce a couple of albums (with little original content), his notoriety is really tied to the success of Van Halen. Stevie Nicks had great success without Fleetwood Mac, Ali Campbell from UB40, not so much.
What I’m trying to demonstrate is the life of the solo vocalist is difficult and it is very hard to make a living regardless of what genre that you may find yourself. It’s the same whether it be Rock, R&B, Jazz or Country. It is the exception rather than the rule that even the most accomplished singer can make a successful career going it alone.

The Realities of the role

I’ve come across some negative attitudes toward the backup singer. From an industry outsider or the uninformed is one thing and easily ignored, but when it comes from within the industry it can not only be hurtful but damaging to the careers of the singers. You may have seen the documentary “20 feet From Stardom” which was focused on a small group of backup singers. Included there is a clip of Mick Jagger (who’s relationships with his backup singers is no secret) he said something to the effect of “I don’t think I could just sing Ooo’s and Ah’s all day”. I agree with the author Elias Leight from an article in The Atlantic that this sounds more than a bit dismissive.
Not to pick on Mr. Jagger as he is most certainly not alone (as referenced in the documentary) but I have read of this elsewhere-that when backup singers get a chance to put a solo effort together they often don’t get the kind of promotion and support they need to find success. Darlene Love was featured in the above mentioned documentary and is one of the better known to start out as a studio/session singer. While working in L.A., with The Blossoms, she sang lead on a demo version of “He’s a Rebel” but Phil Spector used it as the final cut and credited The Crystals with the song. She was told by Spector that it was because The Crystals were touring and he needed a new song fast, he then promised her the song “He’s Sure the Boy I Love” but once again released it as The Crystals. Oddly these songs have not been changed to properly credit Darlene Love and The Blossoms. She would later successfully sue for royalties. Love is also well known for her later solo work and the Christmas classic “Christmas (Baby Please Come Home)” and her annual appearance on The David Letterman show. She has also appeared in Movies and Stage performances.

These singers can be heard in any genre or doing live spots or recordings for radio, tv shows, commercials, jingles, in theatres or film productions. Rarely the session singers/musicians produced hit songs by design like the fictional Archies with “Sugar Sugar”. Perhaps it was serendipity when Steam did “Na Na Hey Hey Kiss Him Goodbye“, they were not a band at all but a collective of studio musicians that wrote and recorded the song. Similarly we had The Buggles with the massive hit, “Video Killed the Radio Star“, the group was assembled with the writers of the song and supplemented with other session artists after they realized they had a hit on their hands.

Many backup singers moved on from their roles, such as Sheryl Crow from Stevie Wonder and MJ, Mary J.Blige from Uptown Records (MCA) or Luther Vandross a singer for just about everyone including touring with David Bowie and Roberta Flack, but the majority stay in that role for as long as they can get the work. They are not the “unsung heroes” but they often continue to be the unnamed.

Thanks for reading, I am working on a few ideas, Rolling Stone Magazine has updated their ‘Greatest’ lists so this of course drives me to distraction. Somewhere in there is a few blog topics at least.